I have switched to using the new FamilySearch site and I mostly like it. I had to switch because some of the record collections I use were moved to the new site and removed from the old site. That certainly gave me incentive to make the move. From Ancestry Insider I learned  a new version of the site was released in July, adding some new features as well as additional databases.

One new feature is the addition of a filter panel for the list of Historical Record Collections. I rarely use the global search function because I get too many hits. I usually choose to Browse the collections to find record sets of interest and then search within that database. The filter function works at all levels, even with the list of collections. Now to quickly get to the set of Ohio records I am interested in, I just have to type “oh” to get the list reduced to just the Ohio collections plus one from Bohemia. 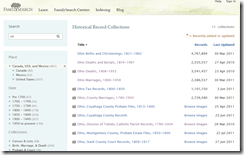 In addition, I learned from chatter on the Pfalz-L list that the IGI batch number search is also affected by the new version. Some, but not all, of the batch numbers are now available on the new site, with the new filter panel features. In my Resources page on my web site, I provide links to batch number searches for villages in Germany, Ohio, and Missouri where I have ancestors. These used the old web site, producing results in the old format. I have now converted the German links to use the new web site and new results format, but I found that the Ohio and Missouri batch numbers are not yet available on the new site (as of 6 Aug). Here is an example for an Abstatt, Germany batch number. 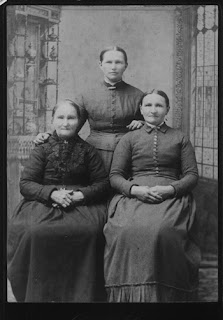 I recently added a couple of pages to the Resource section of my web site, providing IGI Batch numbers for various locations in Germany and the United States. For those not familiar with the International Genealogical Index (IGI), it is an index to microfilm records found in the FamilySearch library. When volunteers indexed a record set found on a film, the results were assigned a batch number.  By restricting a search of FamilySearch to a given Batch number, the search is limited to the records from the given locale. This allows more precision in the search and reduces the number of unrelated results.
This reminded me of how I used the advanced search capability of IGI to find my great grandmother’s family. This was done years ago on the computer at my local Family History Center, before the capability was available on the Internet.  The facts I knew was Michael Velten had married Catherine Miller in Ohio. Should be simple, but a quick check of a printed census index showed there were at least 300 Catherine Millers. There was no Ancestry and no Internet, so manually viewing each entry required cranking through microfilm at the NARA archives in Waltham, Massachusetts.
Read more »

I use a variety of resources in my research. The trick is to record the resources in a way that makes them easily accessible when I need them. Another consideration is sharing these resources with others, as a way of making a contribution and paying it back to the genealogy community. This brings up the subject of social bookmarking and how the new technologies can be applied to genealogy. Below the fold I  describe some of the techniques I use to record and share resources, including how I make use of a social bookmarking site.
Read more »

Popping Babies out of the Oven

My great-grandmother, Friederika Christina Utz, came to the US with her family in 1881, shortly after she gave birth to a child out of wedlock, a daughter Emelia. I don’t know if that was the reason the family chose to emigrate, but they settled in New York where they had many other family members who had made the same trek from Abstatt to the US. Her family eventually settled on a farm in Hempstead, New York, out on Long Island. Their city cousins from Brooklyn and Queens would visit on Sundays, a circumstance that greatly irked Friederika’s younger sister, Pauline, who resented living on a smelly farm and envied the fine clothes of her cousins.
Read more »

I chose Family Tree DNA for my Velten y-DNA project because they have the largest database of results and host over 6000 surname projects, and they specialize in genealogy and nothing else. But it was hard to resist the 23andme year-end $99 offer. The 23andme tests include an Ancestral portion, with samplings from both y-DNA and mt-DNA (and I think autosomal DNA), and a Health portion that will supposedly screen me for risks of disease and for traits like baldness. In fact, the marketing hype on the 23andme web site heavily pushes the health aspects of their testing and has caused increasing scrutiny from the FDA and Congress.
Read more »

View in Another Language

Going to the West Blog by David Velten is licensed under a Creative Commons Attribution-NonCommercial 3.0 United States License.
Based on a work at www.dvelten.net.
Permissions beyond the scope of this license may be available at http://goingtothewest.blogspot.com.